Raptor Migration provides birders with the opportunity to experience one of nature’s most mysterious and thrilling spectacles. Massachusetts offers several sites to observe diurnal raptor migration during Fall, including the oft-overlooked Mount Watatic. This 1,800 foot peak on the Massachusetts/New Hampshire border rewards visitors with stunning landscape views and rustic charm. Each September, it can also provide a unique vantage point to watch thousands of Broad-winged Hawks on their long migrant journey.  This talk will introduce Mount Watatic, the dozen species of regular migrant raptors seen there, and a handful of irregular ones too. We’ll talk about what makes Watatic so underrated, and also answer all your questions about Hawkwatching – how we count all these birds, where they’re going, and how we make sure we don’t count the same bird twice. 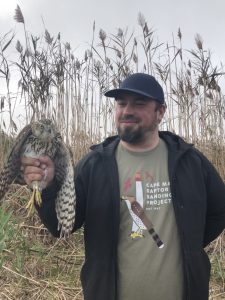 Brian Rusnica lives in Cambridge, MA and is originally from Upstate New York. He is a volunteer hawk migration counter and co-coordinator for the Mount Watatic Fall Hawkwatch site, and has also contributed as an observer at the Plum Island Spring Hawkwatch site. He has served on the Board of Directors for both Eastern Mass Hawk Watch and North East Hawk Watch since 2017. His hobbies that intersect with birds of prey include photography, graphic design and travel. In 2014, he documented a state raptor photographic ‘big year’, and in 2018, documented breeding Cooper’s Hawks. He serves as an administrator on the “Raptor ID” Facebook group (endorsed by HMANA and Hawkwatch International). His raptor photography has been featured in Cornell University’s Living Bird magazine, Urban Raptors (2018, ed. Boal & Dykstra) and The Cooper’s Hawk (2018, Rosenfeld). In 2019, he launched an online shop which features his raptor artwork. His freelance design collaborations include work with the Cape May Raptor Banding Project and the Owl Research Institute.